Hilton Head Island was incorporated as a town in 1983, but it's been a popular island for its nnatural beauty for more than 300 years. The island is home to an environmentally planned resort nand residential neighborhood and some of the best historical sites in the state. Since it's been nincorporated, of course, the island has become quite the place for residential living.

Houses are harder to come by here due to the planned nature of the island community and the npreservation that is taking place. The first settler was granted 1,000 acres in 1717—one John nBarnwell became the first settler on what is known today as Hilton Head Plantation. However, it nwasn't until 1790 that the island gained worldwide recognition for the first cotton crop raised by nWilliam Elliot.

By 1860, the island was home to 24 plantations specializing in cotton, indigo, sugar cane, rice, nand a few other crops. Since the island was in the heart of humid low country, most landowners nused the island solely for farming and opted to live on the mainland. 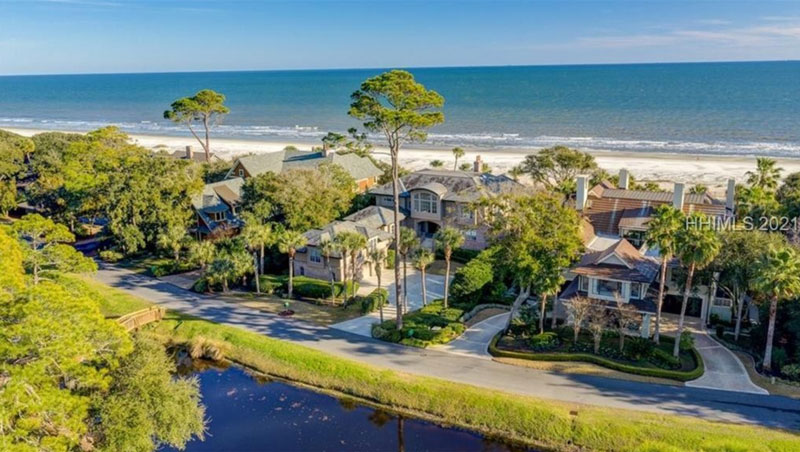 Hilton Head has a median home value of $483,600, and there are 35,242 housing 'units,' which ninclude single-family homes, apartments, mobile home parks, and other housing, spread over just n41.36 square land miles. 70% of the island is within gated communities.

More than 40,000 residents live in Hilton Head among several single-family homes, condos and napartment complexes, and resort communities. The lifestyle is very laid back, with only 16,955 nemployees and several retirees calling the island home. The median age is 57 years old, so many nof the activities are focused on leisure, art, and culture.

Although most people have vehicles and several gated communities protect the properties on the island, the people here are friendly and ready to welcome you home when you choose Hilton nHead homes for sale.

Welcome home, also, to miles of public beach access with free parking, metered parking, and nsome that include annual passes for islanders only. There are more than 20 parks on the island, and only 18% of the households on the island have children under age 18 living in them.

Hilton Head Island is home to five public schools for that small percentage of children and nfamilies, including three elementary options and a middle and high school. There is also a nselection of private school options:

The schools are rated as some of the best in the region, and the private schools have some of the nbest statistics and student successes in the state.

Hilton Head Public Service Department is responsible for irrigating the six major watersheds on the island to preserve the hundreds of acres of wetlands that are home to several forms of rare nvegetation and endangered wildlife. The saltwater marshes, in particular, are a vital part of the necosystem on the island.

There are regulations in place to protect trees and other native vegetation. In 2017, Hilton Head nIsland was certified as the "First Public Audubon Sustainable Community in South Carolina" by nAudubon International. Today, the island is investing in ecotourism with wildlife tours, refuges nand preserves, and plenty of educational opportunities to explore local wildlife.

The island also went as far as to install 60 miles of public pathways and nature trails, nencouraging people to walk, bike, or otherwise explore so that vehicles are driven on a minimal nbasis, furthering conservation efforts. Plus, nearly 300 acres of land belong today to the Hilton nHead Island Land Trust, which protects several areas of the island.

Other Points of Interest and Notable Facts

The hospitality industry is a major employer on Hilton Head Island, with 8 of the 10 biggest nemployers being restaurants or hotels and resorts. The only two employers on the list not in nhospitality are the Hilton Head Medical Center and Beaufort County School District.

Hilton Head has a public trolley service that the Low-country Regional Transit Authority noperates. Locals often use it as tourists for a quick and fun way to get around town.

Known author Patricia Cornwell is from Hilton Head, and this is where John Mellencamp did "Jack and Diane" in 1982. Duncan Sheik, late 90s singer-songwriter, was raised on Hilton Head, nand former NBA star Michael Jordan even had a house on the island for about 11 years.

We do not attempt to independently verify the currency, completeness, accuracy or authenticity of the data contained herein. It may be subject to transcription and transmission errors. Accordingly, the data is provided on an “as is,” “as available” basis only and may not reflect all real estate activity in the market. © 2021 Multiple Listing Service of Hilton Head Island, Inc. All rights reserved. Certain information contained herein is derived from information which is the licensed property of, and copyrighted by, Multiple Listing Service of Hilton Head Island, Inc.

Thank you for contacting us, we'll get back to you shortly.

Sorry, we are unable to send your message at the moment. Please try again later.

Thank you for visiting the Lisa Sisko Team - Hilton Head Island! To continue your Hilton Head Island property search please complete this brief form. You'll then be able to save your favorite listings and searches and receive email updates when listing types you're interested in hit the market! Thanks again and happy searching!

Thank you for contacting us, we'll get back to you shortly.

Sorry, we are unable to send your message at the moment. Please try again later.